Competitive, fast-paced and thought-provoking, this game empowers students to manage one of two firms in a Bertrand duopoly as they set their prices to maximize profits.

Created in partnership with  Joseph Harrington, Wharton’s premier professor of business economics and public policy, Repeated Duopoly is a pricing simulation through which students learn the principles of best response function, Nash equilibrium, and game theory. Using the Bertrand model to explore competitive pricing in a market dominated by two firms, players engage in price wars with the unknown manager of the competing business in order to be attract consumers and maximize profits.

Set a higher price than the other firm and risk yielding the entire market to your rival; set the same price, and the companies could share both the market and profits. Alternatively, if either firm lowers its price, even a little, they stand to gain the whole market and substantially larger profits. But, like most economic theories, the Nash-equilibrium strategy and bargaining problems it generates must be executed in a (simulated) marketplace to truly be understood. 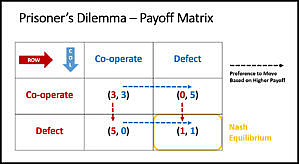 Students role-playing as managers at a firm with just one major competitor selling the same product with same costs must choose a price from {1,2,3,4,5,6,7}, with the profit they earn each round depending on their pricing strategy as well as the price of the other firm in their market has set. NOTE: The competing firm is managed by another student in the class (who has been randomly matched with them), and neither player knows the identity of the other. Both students have the same profit table and receive the same set of instructions.

After each student submits their prices, they will both learn the prices that were selected and the profits earned. The student’s payoff is the average profit earned over all rounds played. Repeated Duopoly is easy to learn, simple to play, and teaches complicated economic concepts in a uniquely exciting way!