In today’s globalized economy, it is a small world after all. Now more than ever, a firm’s costs, revenues and assets are often tied to international political and economic events, making it vitally important for multinational managers to understand how policies, alliances, and other geopolitical issues impact their business strategies.

Based on his research examining the impact of political hazards on international investment strategy, such as efforts by multinational corporations to engage in corporate diplomacy to win the hearts and minds of external stakeholders, Deloitte & Touche Professor of Management Witold Henisz partnered with the Learning Lab to create Geopolitical Influence and Strategy Tool (aka, GIST). This engrossing, one-of-a-kind simulation allows students to map out an international scenario and populate it with actors from the world stage, each of whom has a varying degree of decision-making influence and a defined set of beliefs. 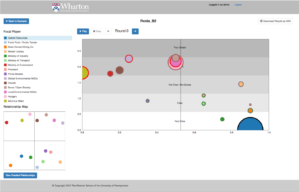 ing interface, players can then explore the probable relationships between the scenario’s global leaders and plot out various decisions and interactions among them. Then, through viewing a second interactive graph displaying the evolution of each actor’s preferences over time, students can see the policy outcomes that result from relations established in the simulation over time.

Once a user defines the actors and issues within their international scenario, as well as the corresponding status quo/extreme values of its inhabitants, they’re able to dig in and modify the preferences and beliefs of those actors. GIST then uses a sophisticated algorithm to generate the eventual geopolitical outcomes and alliances that result.

The truly unique aspect of this sim is in the interactive graphing interfaces that enable students to play with different scenarios and see the corresponding policy results that could impact their business strategy: 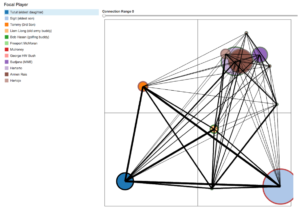 kely to prevail in a dispute. The Time Series graph displays the simulation’s overall outcome by plotting the expected evolution of each actor’s preference over several rounds of play.

GIST offers a powerful demonstration of geopolitical impact on international business strategies and bottom lines in a way that ensures students are able to see (and map out) the direct connection with the beliefs, conflicts, influence and relationships of actors on the world stage, and learn to adjust their corporate strategy accordingly.

For more information about GIST,  email the Learning Lab team.