STAY TUNED: This is the first of a few “insider” posts with IT Tech Director Joe Lee, as he looks at the educational use of Oculus Go through the lens of the Wharton Learning Lab… 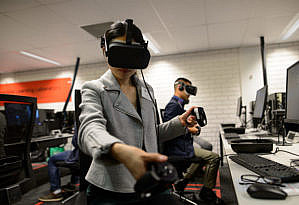 Keep Talking and Nobody Explodes is a cooperative, team-based game where one player is trapped with a ticking time bomb that must be defused before it goes off, and their teammates are tasked with coaching them through the process with information found in a complicated Bomb Defusal Manual. The trick here is that only the defuser can see the bomb, and only the “experts” deciphering the defusal instructions can see the manual. The high-pressure play that ensues is a great lesson on teamwork, communication styles, and operating in a crisis.

Wharton professor Ethan Mollick uses the game to illuminate these and other learning points within the context of entrepreneurship, and has long partnered with the Learning Lab to deliver the simulation with laptops that we lend out from our Exec Ed group. However, when Facebook released the Oculus Go, and Mollick subsequently discovered that Keep Talking was one of the available game apps, he asked the Lab to help him bring his bomb-diffusing entrepreneurship experience up to the next level – and into the realm of virtual reality (VR).

On the surface, Oculus Go kits present an intriguing value proposition over laptops. First off, they’re a lot cheaper ($249, as of this post), they don’t require wires or cables, and they’re compact (thus, highly portable). These are all key factors that play into the efficacy of supporting a technology-based solution at classroom scale. After all, with the limited amount of time between scheduled classes, there are precious few minutes to burn setting up an interactive learning experience (ergo, quicker is better).

That being said, Facebook’s Go devices posed their own set of challenges – largely due to the fact that this was the first instance of the Learning Lab supporting a VR game. Laptops, of course, are a tried-and-true technology with a predictable set of parameters that can practically be managed on auto-pilot; they are a “solved” solution in that way, given that my team has been working with and troubleshooting classroom laptops for years. VR headsets, though? Logistically speaking, that’s a whole other ballgame…

Some of my initial concerns were: 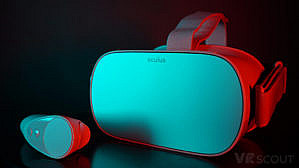 These were critical questions that needed to be answered before I could commit to supporting Oculus devices in the classroom setting, no matter how excited Prof. Mollick was by the prospect. Fortunately, I was able to allay most of those concerns once I got my hands on a few headsets of my own – for research purposes, naturally.

With a bunch of identical Go kits spread out in front of me, I immediately realized we’d need an effective way to track which controller went with which headset. Since they all look the same – and are completely wireless – it’d be virtually impossible (no pun intended) to tell at a glance what went with what, once they were out of their cases. To solve this issue, I bought a label-maker and came up with a naming convention to keep everything straight.

I then downloaded the Oculus app for my iPhone, inadvertently queueing up my next problem: Just as I feared, the devices could not connect to the University’s wifi. Later I found out they can be used without a web connection, but the initial setup does require the internet. Penn’s security necessitated a far more complex pairing process than the Oculus could manage, however. After a series of tries and misses (connecting to the guest wifi, using a special devices-only wifi ssid, etc.), I had to bring out the big guns and create a wireless network. Luckily I was able to use my phone as a mobile hotspot, but unless you’re in a similar pinch, I would not recommend this route because the speeds are lacking (and the initial setup is a lonnnng process). If I had to do it again, I’d work with our IT support staff to find a workaround for connecting to the University wifi – or get a wireless router and set it up myself.

Once my devices were on the internet, I went through the setup for each one. It was all fairly straightforward and basically involved creating an Oculus account then adding each Go to it through the app. While it certainly doesn’t take a wizard to complete these steps, a wizard is in fact your guide during the entire connectivity process (including forcing you to watch a mandatory safety video, which got very old very quickly). Dark magic aside, setup ends with the Oculus downloading updates – taking an additional 20 minutes per device, using my slow hotspot connection. I learned after the fact that multiple devices can indeed be set up at the same time, allowing them to download the updates all at the same time. (Thanks, wizard!)

Finally, I was ready to Go.

*A quick note – I was able to pair all 9 of the Go devices I had at my disposal to one Oculus account on my mobile device. I bought a Keep Talking game in the Oculus app store and was able to easily download it to each device, as applications are tied to the account, not the Oculus Go itself, so I was able to purchase the game once and load it onto each headset. After that, I was able to turn off the wifi connection and still play the game – a critical answer to the question of whether these VR devices are practical for classroom use on campus.